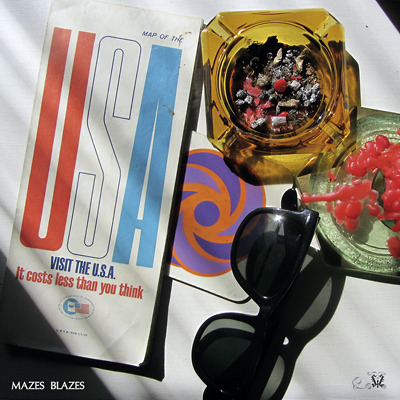 We've played a lot of music in a lot of bands. We've played amazing shows with great bands near and far and away. We went all out signing with booking companies and labels, recording ultra-complex expensive albums, touring, and getting buzzed (about).

We liked it better when we was friends.

Being in The 1900s and Office, Edward, Caroline, and Tom nailed a lot of high class jocks, but the grass was meaner on the other side.

So they hopped a barbed wire fence, crossed the tracks and started Mazes. They're just some freaks who love to freak out playing music and writing lyrics in the middle of the night under any influence. Ed doesn't trust art made during the day.

Pat Cavanaugh grew a couple of beards and became a magnificent beast.  We're pretty sure Charlie d'Autremont is spying on us. (Charlie Ransford is now proving that frets are baseless.)

The album is a co-release between Parasol Records and the band’s new Sanzimat International imprint.